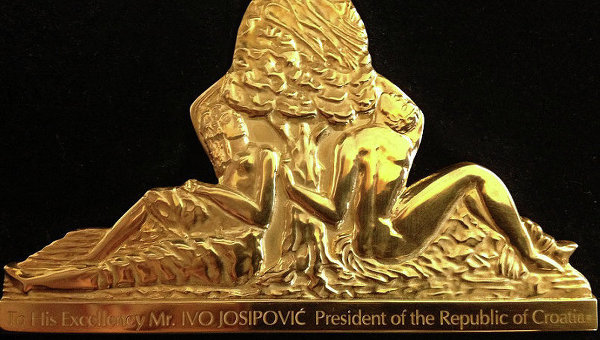 Dr. Moshe Kantor, President of the ECTR, said that the medal is being awarded to Schulz in recognition of his commitment to the preservation of the memory of the Shoah and the exceptional leadership in the struggle against the rising wave of ultra-nationalism and hatred in Europe.

“The number of hate-motivated crimes and incidents is rising around Europe. Political extremism both inspires and profits from these acts. At this worrying time it is important to send a clear message that political courage and moral leadership is vital for our societies,” Dr. Kantor said. “Martin Schulz, the outgoing President of the European Parliament, is a man who throughout his political career has taken an uncompromised stand against xenophobia, intolerance and political extremism in Europe.”

“A strong and unified Europe is the greatest barrier against hatred and extremism and even during some very difficult years, economically and politically, President Schulz has remained a voice of reason, sanity and unity.”

The European Medal of Tolerance in the area of culture will be granted to Andrei Konchalovsky, a Russian film director, producer and screenwriter, perhaps best known for his latest movie, the Holocaust drama “Paradise”. In 2016 this movie won the Silver Lion at the 73rd Venice International Film Festival. In December 2016 it was shortlisted in the nine films to be considered for the 89th OSCAR Academy Award.

“The Medal goes also to Andrei Konchalovsky because of his lifelong achievements in the area of remembrance of human tragedies”, emphasized Kantor. “Extremists are using and manipulating the past to serve their own agenda, and it is an important role of people in the arts and culture to stand against extremism and provide those of us who did not experience the past with teachable moments for the present and the future which Andrei has done.”