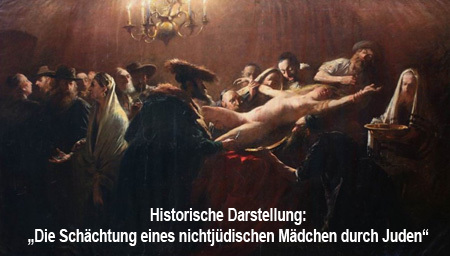 Twenty years ago Oprah Winfrey recorded a shocking interview
of a 29 year old Jewish woman who stated that her family, and many other
Jewish families throughout the USA, routinely practiced Satanic rituals in which
incest, human sacrifice and cannibalism occur. The interview on May 1, 1989
also revealed that these practices were a common occurrence since the 18th
century and that they were practiced by certain Jewish cults.

The Jewish woman that made these revelations was "incognito" during the
interview and was identified only as "Rachel." Today she has been identified
as Vicki Polin and she now runs a center to rehabilitate Jewish children who
have been sexually victimized by Jewish Satanists.

The video of the interview had for a long time disappeared because it was
banned by the ADL of B'nai B'rith but today it has resurfaced on the Internet.
Today as the world witnesses the hideous war crimes against the children
of Palestine, one wonders if Israel is not governed by people who belong
to these Satanic Jewish cults described by Vicki Polin?

The President shall make recommendations to Congress for: (1) the allocation of responsibilities relating to the exploration and utilization of space resources among federal agencies, and (2) any authorities necessary to meet U.S. international obligations with respect to such exploration and resource utilization.